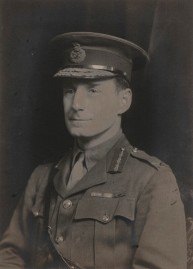 The Asquith family were frequent visitors to Clovelly Court in the early years of the twentieth century and we meet them in chapter 5 of Barefoot on the Cobbles in this context. When Daisy moved to Torquay, I felt that, along with the majority of the population at this time, she needed to visit the cinema. Apart from the main feature and the ‘short’, there would have been a Pathe newsreel. I turned YouTube to see what would have been screened during the week of Daisy’s visit. In one of those amazing twists of fate, it turned out that Arthur Asquith’s marriage to the Honourable Betty Manners, heir to Clovelly Court, was being featured. It was one of those incidents that might read as a contrivance but like most of the other minor details in the novel, this really was true.

The Honourable Arthur Melland Asquith, son of the Prime Minister, was born in 1883. He went to Oxford University and then worked overseas. He had a distinguished career in the First World War, receiving the DSO on three occasions. Arthur Asquith had four daughters and died in 1939.

‘ ‘I know her,’ Daisy squeaked, elbowing Winnie violently, ‘That’s the Honourable Betty Manners. I knew she was going to marry Mr Asquith’s son but I never thought to see her on the screen down here in Torquay.’

The short film showed crowds lining the street, as the Prime Minister’s son, resplendent in his army uniform, accompanied his bride. Daisy’s two worlds collided, leaving her drained and a little homesick.’

Barefoot on the Cobbles will be published on 17 November 2018. More information about the novel can be found here. Copies will be available at various events in the weeks following the launch or can be pre-ordered from Blue Poppy Publishing or the author. Kindle editions can be pre-ordered for the UK and also on Amazon.com.