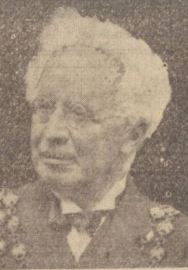 Dr Toye is one of several medical men who grace the pages of Barefoot on the Cobbles.

Edwin Josiah Toye was born at 8 Bonner’s Park, Bethnal Green, London on 3 November 1871. His father, another Edwin Josiah Toye, was a chemist. His mother was Jane née Buggel. Edwin trained at St Bartholomew’s Hospital and specialised in opthalmics but was also awarded a gold medal for his achievements in the field of obstetrics. He worked as a house physician at the Metropolitan Hospital before coming to Bideford as a locum to Drs Rouse and Gooding.

After the death of Dr Rouse, Edwin became Gooding’s assistant and later a partner in the practice. He is credited with owning the first car in Bideford, in 1902. Dr Toye was a leading Rotarian and served as mayor of Bideford in 1925. It was during his tenure that the building of the new Bideford Hospital was begun and Bideford Bridge was repaired. On 8 September 1903, married an older lady, Mary Ellen Keene née Greatorex, in Northam and they lived at Stanhope in Northam Road. She already had children but they had none of their own. Dr Toye died suddenly at Stanhope on 2 January 1938.

‘Dr Toye was a tall, brusque man in his forties. When Dr Kay called, you felt that he was visiting for a cosy chat, Dr Toye was very different; he was business-like, hurried, eager to give his verdict and to move on to the next patient.’

Barefoot on the Cobbles will be published on 17 November 2018. More information about the novel can be found here. Copies will be available at various events in the weeks following the launch or can be pre-ordered from Blue Poppy Publishing or the author.