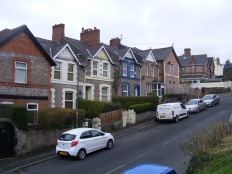 We meet Robert Meyers towards the end of Barefoot on the Cobbles, when the action moves to Torquay and illness stalks his household. Robert is one of the characters whose speech hints at the Devonshire dialect. In truth, it would probably have been broader but that would have rendered it incomprehensible to non-Devonian readers. Robert John Meyers, or Mayers, is Kate Cornelius’ father. Despite his Germanic sounding name, he was born in Morchard Bishop, Devon in 1846. He was registered with the surname Mare and was the son of John and Charlotte Mare née Drew.

Robert married Caroline Foot in 1868 and settled in Torquay, where they had five children. Initially, Robert worked as a carman, later he became a packer on the railway and then a furniture packer. When his wife died, in 1912, he lived with his married daughter Kate in Upton Road until his own death in 1921.

‘‘Then Mr Meyers’ foot was on the stair. He only ever came to the upper floor to use the bathroom. This time though, he knocked on Daisy’s door but remained discreetly outside.

‘Them’s all falling sick now,’ he called, with a lapse of grammar that would have earned a reprimand from his daughter. ‘I hopes you can shift for yoursen a bit. Francis has just taken hisself off to bed and Mrs Meyers started with it this afternoon. There’s only me left standin’. What’s that they say about creaking gates eh?’ The old man chuckled to himself.’

Barefoot on the Cobbles will be published on 17 November 2018. More information about the novel can be found here. Copies will be available at various events in the weeks following the launch or can be pre-ordered from Blue Poppy Publishing or the author.